After a successful two-night run at the Jazz Standard in NYC in January, The Stryker / Slagle Band headed back up to bassist Jay Anderson's Mountain Rest Studio in New Paltz NY to lay down nine new original tracks as well as a cover of Thelonious Monk's “Ruby My Dear”. This is the third CD by the same quartet: Dave Stryker-guitar, Steve Slagle-sax, Jay Anderson (bass), and Victor Lewis (drums), that released The Scene to critical success in 2008. Their fifth CD as the Stryker / Slagle Band--Keeper captures the live energy and group dynamics of a band that has been honing their sound for over 20 years, always striving to push the music ahead. Guitarist Dave Stryker and Saxophonist Steve Slagle's last CD The Scene was voted one of the Top CD's of 2008 by: Downbeat Magazine, Jazz Times Magazine, Jazz Improv Magazine, National Public Radio, Newark Star Ledger, and WBGO. Dave Stryker spent over 13 years with Stanley Turrentine, and also worked with Jack McDuff, Kevin Mahogany and Eliane Elias

Guitarist Dave Stryker is one of the most prolific talents in jazz, with almost two dozen releases as a leader, and stints with artists including Stanley Turrentine and Jack McDuff. His unique style has garnered him a number of prestigious awards. No less productive is Stryker's long-time co-leader, saxophonist Steve Slagle, who has led his own ...

Dear fellow AAJ contributor, 2010 is shaping up to be the most important year in All About Jazz's 15 year history and I wanted to share our progress since our March newsletter.Index The State of AAJ Label Profile Assignments: Interested? Track Reviews Wanted The AAJ Store: Check Us ... 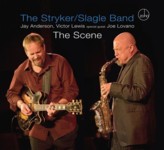 The Stryker / Slagle Band: The Scene

Feel-good music may be the best way to describe The Scene by The Stryker/Slagle Band. This quarter presents eight original songs and one cover, all in an upbeat mood. Each song, in some way, is dedicated to brother musicians.Guitarist Dave Stryker spent more than 13 years with Stanley Turrentine and has worked with Jack ...

Consummate professionals, guitarist Dave Stryker and saxophonist Steve Slagle continue to raise the bar of instrumental interplay with The Scene. This pair eschews gimmickry for chops and produces some of the best post-bop anywhere. Joe Lovano, himself one of the busiest and best tenor saxophonists around, joins them again, as he did on their previous release, ...