Results for "Stories from the Shed"

Stories from the Shed 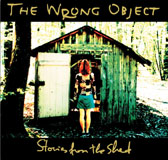 The Wrong Object: Stories from the Shed

If Platform One (Jazzprint, 2007) found Belgium's The Wrong Object on a roll following The Unbelievable Truth (MoonJune, 2007), then Stories from the Shed positions them as one of today's busiest groups. Three records in one year is impressive enough, but Stories is notable because, while the others were collaborations with British jazzers Annie Whitehead (trombone), ...