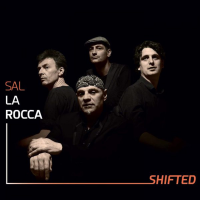 The saxophone lines snake out of the speakers, rustling the airwaves like a breeze through firs or singing with all the lyricism of the finest vocalist. The double bass's hardwood lays a strong foundation. The electricity of the Wurlitzer piano growls atop that age-old sound, like a lightning storm rolling over treetops. Sal La Rocca's Shifted ...

Jeroen Van Herzeele is a Belgian jazz saxophonist. He was born in Zottegem. He plays in various bands such as Greetings From Mercury, Maak's Spirit, Octurn, Tomas and Co, Ivan Paduart etc... He won the Belgian Golden Django in 1999 for best Flemish artist.

Sal La Rocca is originally from Seraing, Belgium, near LIEGE. He was first a Rock guitarist, but switched to the bass as his instrument of choice after hearing (for the first time) music by several jazz greats. After switching, he taught himself how to play by the age of 23. Over time, he become one of the most "in demand" double bassists in Belgium and in the European theater. Starting in the mid 80's, Sal has toured and performed with a wide array of musicians on the European continent. The 90's saw him expanding his presence with world tours. His list of celebrity musicians he performed with continued to grow, adding well known names like Lee Konitz, Philippe Catherine and Toots Thielemans to his musical resume. During his career, Sal has recorded on numerous albums