...Fusion of Balkan music, visual art V Jing and photography... ...improvisation and capturing the moment of creation... ...To show the music with picture... Serbian Jazz Bre! Band is formed as an integral part of the eponymous multimedia project by photographer Ivan Grlic. Trying to "revive" pictures, the music part of the project has brought together jazz musicians forming an artistic expression which uses both the language of modern jazz and musical heritage of the area in which they create. The repertoire is mostly made ​​up of original compositions as well as compositions of celebrated Serbian jazz artists and Serbian folk songs, arranged and shaped into a whole that reflects jazz in Serbia, as a specific musical expression, but also with the impacts of East and West, classical music and wealthy Balkan folklore 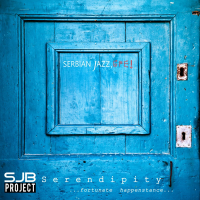 What began as a multimedia jazz experience, a combination of straight ahead jazz music and series of photographs by the band's instigator and producer Ivan Grlić, soon evolved into a live video extravaganza with video projections that run in the background whenever the band is playing live. First there was a book with photographs, which were ...