Since moving to NYC in 1997, Sebastian Cruz has been a prominent and influential musical voice in the development of a Colombian New York sound that has, over the past ten years, gradually become an ebullient musical scene and community. Performing in NYC in venues such as Joe’s Pub, Central Park’s Summer Stage, CultureFest at Battery Park, BAM Café, and others, Sebastian has been involved as leader, band member, composer, arranger and musical director with leading Colombian based projects in New York. These projects include Coba, La Cumbiamba eNeYé, Luc

While the blues is a distinctly American creation, formed, fueled, and furthered by the African diaspora, the United States holds no ownership on blue-streaked sounds. They exist beyond our borders, and Azul Infinito makes that case in artful fashion by simultaneously tapping into various South American musical forms and cultures, reshaping them, and highlighting the color ... 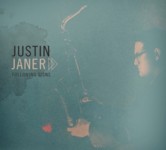 Following Signs, saxophonist Justin Janer's debut as leader, is an assured recording. Janer leads a tight and disciplined quintet through seven original tunes and a cover of Bob Hilliard and Sammy Fain's “Alice in Wonderland," displaying his craft and individuality as a player and composer. Musical high spots arise from the interplay between ...

While people might want to pigeonhole alto saxophonist Justin Janer as a Latin jazz player, Following Signs paints him as a musician and composer with a broad outlook that goes past generic stylistic markers. Janer occupied the lead alto chair when percussionist Bobby Sanabria delivered the goods with the Manhattan School of Music's Afro-Cuban Jazz Orchestra ...