Robin Kenyatta - alto and tenor sax, flute In the 1960s and 1970s, Robin Kenyatta was one of the more original players in the new sound of jazz. Unafraid to put his alto sax through unexpected twists, Kenyatta became famous for his free jazz performances. During a career spanning four decades, he released 12 albums and appeared on dozens more. He held his own against the greatest jazz men of the twentieth century and, according to All About Jazz, is remembered as “one of THE altoists of the '60s.” Born Robert Prince Haynes on March 6, 1942, in Moncks Corner, South Carolina, Kenyatta was the third child of Thomas and Rebecca Haynes

A focus on Tom Rainey, Ingrid Laubrock and Mary Halvorson

On this show we feature some exciting new albums from Vanessa Perica, Dan Pocetti and Noshir Mody The main focus is on the work of Tom Rainey, Ingrid Laubrock and Mary Halvorson with music from the first album released under Rainey's name and then each musician explored in other projects. These selections clearly ... 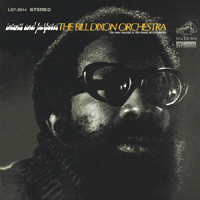 Intents And Purposes has long been revered as Bill Dixon's singular masterpiece. Out of print for years, the late trumpet innovator's magnum opus has been lovingly remastered and reissued on CD, by International Phonograph Inc., in a deluxe mini-LP styled package that replicates the original 1967 issue, providing an important opportunity to reevaluate this seminal work. ...

Bill Dixon, Intents and Purposes (International Phonograph). Dixon, who died last year at 84, is typically described as a force in the free jazz that emerged in the1960s. He was that, but Intents and Purposes defied labeling when Dixon recorded it more than four decades ago. This long overdue reissue confirms that the album withstands categorization. ...

Trumpeter and composer Bill Dixon is one of those rare figures in creative music who was both there as it took its initial steps and currently remains at the forefront of contemporary improvisation. In the last two years, he has directed or co-led orchestral configurations and recorded and performed with hand-picked small groups of international renown. ...

Stompin' At The Savoy