Roberto Tola is a multi awarded Italian Jazz and Smooth Jazz Guitarist, Composer, Studio Recording Artist, Recording Academy member. He was born and raised in Sardinia Island, Sassari (Italy); began studying music when he was just six years old. In 1976 studies Cello in the Conservatory of Music in Sassari. Meanwhile continues his studies of Modern and Jazz Guitar and established the sextet named JAZZMANIA. From 1989 is co-founder and member of the Italian “Blue Note Orchestra”, and from 1991 up to 2010 is the official guitar of the “OJS Big Band” (Sardinia Jazz Orchestra), also conducted by well known Carla Bley, Bob Mintzer, Colin Towns, Giorgio Gaslini, Bruno Tommaso, Giancarlo Gazzani and others more. Roberto has played in many famous Jazz Festivals and in a long list of concerts in Italy, Europe and in the far east

Nicholas Payton, The Bad Plus and More

This week we open with the great Drummer Jerome Jennings, a musician who has a keen eye on the social issues and political environment of today, and a cut off his new album Solidarity. We also visit the world of The Bad Plus with a song off their newest and highly anticipated album called Activate Infinity. ... 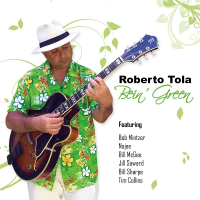