Combining elements of jazz improvisation and harmony with an approach to guitar playing heavily influenced by diverse players such as Jim Hall, Robin Trower, Fred Frith, and sitar virtuoso Ravi Shankar, Rex Shepherd has forged a niche for himself with original music that typically lies somewhere just outside the usual genre labels but is still music that is approachable. Having been described as “Robin Trower meets Miles Davis,” Shepherd’s music spans from full on instrumental rock tunes to traditional jazz compositions with a good dose of free improvisation and sound experimentation using prepared and effected guitar sounds and instruments such as the “oceanharp” and the Theremin. His compositions are also a blend of influences, from Wayne Shorter to John Cage, and most often are directly inspired by people, literature and other art forms, and experiences that hold significant meaning in Shepherd’s life

We Are All Branches of the Same Tree

David Pate & Rex Shepherd, One Half Of The Oddyssey Quartet, To Release New Album Seeing Sound

The first duet release from one half of the Oddyssey Quartet, with David Pate (Sam Rivers Rivbea Orchestra) and guitarist and composer Rex Shepherd (No End of Now). Seeing Sound features the two playing an improvised set, creating palpable musical textures using subtle harmonic and melodic ideas and developing them into intuitive conversations, “seeing” the sound ... 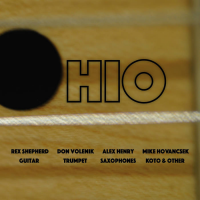 Guitarist Rex Shepherd has released three albums digitally: Ohio, Sonority and Duets. Combining elements of jazz improvisation and harmony with an approach to guitar playing heavily influenced by diverse players such as Jim Hall, Robin Trower, Fred Frith, and sitar virtuoso Ravi Shankar, Rex Shepherd has forged a niche for himself with original music that typically ...