Rogelio Ramirez (also known as Roger or "Ram") was born in San Juan on September 15, 1913. He arrived on Ellis Island in 1920.He was raised in New York, was recognized as a prodigious talent and by 13 was a professional musician, and a member of the American Federation of Musicians. Ramirez worked with the Louisiana Stompers, The Spirits of Rhythm, and Monette Moore in 1933. The following year, he joined trumpeter Rex Stewart for a set of recordings that are available today on the Columbia and Classic labels. In 1935, he joined Willie Bryant and in 1937, he went to Europe with a group led by Bobby Martin. A highlight in Ram Ramirez's career carne at the age of 21, in 1934 when he literally substituted for Duke Ellington in a small group led by Rex Stewart, with whom he recorded “Stingaree,” and “Baby Ain'tcha Satisfied.” Ramirez backed the legendary Ella Fitzgerald in 1940, in the band she took over after the death of Chick Webb, and worked with Frankie Newton and Charlie Barnet in 1942 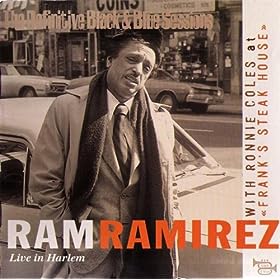