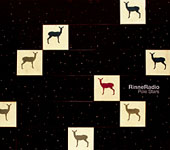 Tapani Rinne is synonymous with the Finnish band Rinneradio, which he steered since its inception as an offshoot from fellow countryman Edvard Vesala in the late 1980s. Over the years, Rinne has ventured into the spheres of hip-hop and electronica, straight fusion, dark dub, lush ambient soundscapes, even Saami yoik singing. But always he has kept ...