Pianist Paquito Hechavarria, began his professional career as a teenage prodigy in the mid-1950s in his native Cuba. His impressive resume reads like a historical document of the Golden Age of Cuban music. Hechavarria was already an established musician in 1955 playing with the Conjunto Colonial de Nelo Sosa. He was pianist with Conjunto Senen Suarez in 1957. By 1958 he was involved in the Club Cubano de Jazz, which was musical group featured at the famed Salon Arcos de Cristal de Tropicana, the same year he was also in Conjunto Casino. In 1960 he was the pianist and vibraphonist in Los Armonicos the most popular combo of the day. Paquito played for several prestigious bands of the era including replacing the legendary pianist Peruchin in Havana’s number one big band, Orquesta Riverside when Peruchin formed his own band. Still in 1960 Paquito Hechavarria recorded with Mongo Santamaria and Willie Bobo who were visiting Cuba, an album that turned out to be the last recording made in Cuba for a US label, the landmark “Our Man In Havana” for Fantasy Records 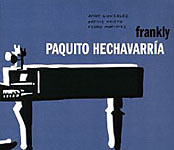 Label: Calle 54 Records
Released: 2010
Track listing: Change Partners; Sweet Lorraine; Oh You Crazy Moon; I've Got The World On A String; Love Is A Many Splendored Thing; Just In Time; The Lady Is A Tramp; I Love Paris; All of Me; Witchcraft; Fly Me To The Moon; I'm Gonna Sit Right Down And Write Myself A Letter.

Pianist Francisco “Paquito" Hechavarría might be best known for his work on Gloria Estefan's “Conga," but that record barely scratches the surface in showing what he's capable of playing. Smoking tumbao-based patterns seem to be embedded in his musical DNA: Hechavarría grew up in pre-Castro Cuba and soaked up the rhythms and sounds of his native ...