Oliver Watkinson - Electric & Upright Bass.  Born in Brunswick Maine, Oliver began studying music at the age of five. He attended college in Boston at the New England Conservatory, where he had the opportunity to study upright jazz bass and perform with greats such as Lee Konitz, Dave Holland, Jason Moran, Cecil McBee, and many more. In 2014, Oliver moved to New Orleans and began performing with BILLIE DAVIES in 2015, Gandhi Castle, Laelume, and various street bands. He has taught and performed all over the United States, as well as Central America and Canada.

The spiritual jazz tradition, as exemplified by John Coltrane, Alice Coltrane and Pharoah Sanders, has been having a resurgence over the past few years in places like Los Angeles and Great Britain. Now here is evidence that some musicians in New Orleans are going down that path as well. Billie Davies is a drummer from Belgium ...

About Perspectives II “All of my music is improvisational... a conversation between musicians and musical instruments. A joint emotional expression inspired by a certain common feeling, thought or perspective in an instinctual, unpredictable, freely expressed improvisation exploring authentic feelings and inspirations that is being communicated to an audience, a listener, a community."—Billie Davies Perspectives II is ...

There could not be much more of a musical, emotional or just vibe difference than that between drummer Billie Davies' latest album On Hollywood Boulevard and her previous project, Hand In Hand In The Hand Of The Moon. However, although they inhabit completely different worlds, both projects had a very long gestation and originate ... 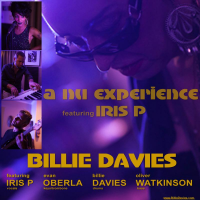 After 20 years of playing, producing and releasing instrumental jazz, Billie Davies is turning a page and is bringing us a Nu Vocal and Electric Experience, On Hollywood Boulevard. Billie Davies' 2012 release of All About Love solidified her position as a professional jazz musician. This recording of standards and original music, charted #1 in CMJ ...

Self-Titled March 13 Release on Red Piano Records The time-tested hand game known as Ro Sham Beau is hard to beat as a quick and efficient method for settling disputes. But the Boston band Ro Sham Beaux seems more likely to start arguments than to end them. Is this a jazzy indie rock combo, a slinky ...