Oleg Frish is a native of Russia and naturalized American citizen (2000) who has developed a distinguished career as a noted international celebrity television broadcast host, journalist, recording artist, performer and music historian. Oleg was born in Zaporozhye, the USSR into a family of musicians. His mother, Svetlana Frish, is a pianist and his father, Eugeny Frish, (two sons, Oleg is the first one) was longtime head of the (Seagull choir) and an important member of the artistic community. For Oleg growing up in the Soviet Union had its American culture challenges. American music was a Cold War persona-non-grata, but yet; hit classics like “Volare”, “Hello Dolly”, and “Sunny” permeated the Iron Curtain

Popular TV Talk Show Host And Singer Oleg Frish Celebrates 20th Anniversary In Media With New Single & Video "The Things We Did Last Summer, From "Duets With My American Idols"

Oleg Frish, the acclaimed New York based radio and talk show host and singer/performer is celebrating his 20th Anniversary in media this year. Since moving from Russia to New York to premiere his weekly talk show on Russian Television International (RTVi) he has interviewed over 2,000 music stars, celebrities, and many of his personal American idols ... 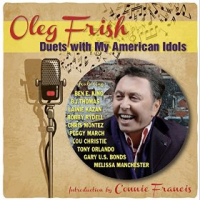 CELEBRATED RUSSIAN TV PERSONALITY OLEG FRISH TO PERFORM AT THE METROPOLITAN ROOM IN NEW YORK Frish will be performing in support of his recently released CD, Bring Me Sunshine,&#151a collection of music culled from the Great American Songbook “Very positive and very swinging." —New York Daily News “He has an appealing voice, his accent is charming, ...

RECORDED WITH PATRICK WILLIAMS BIG BAND Recorded at Legendary Capitol Records Studios in Hollywood, “Bring Me Sunshine" Spotlights Soviet Entertainer's Passion for American Classics Los Angeles, CA—Oleg Frish is probably one of the most famous men in America that you've never heard of. Of the five million Russians living in the United States, Frish is one ...