Jack DeJohnette: Music We Are 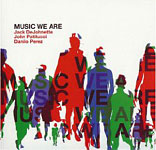 Igor Butman and Yuri Bashmet Team up for "Crossover Concerto"

Birli LAGRNE (with Hadrien Feraud): Electric Side (Dreyfus Jazz) in stores 11/11/2008 Electric Side, the new album by guitar great Birli Lagrne, finds the artist reconnecting with his jazz/rock persona, in the spirit of his 1980's collaborations with Jaco Pastorius. The sound is an exciting and unique update on contemporary jazz sounds, featuring wonderful new Birli ...

"A Life in Time: The Roy Haynes Story" and Boxed Set Documentary

Mina Agossi, the darling of the French jazz scene who has been selling out concerts in major cities across Europe, returns to US in support of her third release on London-based Candid Records, Who Wants Love? out on August 21, 2007. The “gifted chanteuse“ (Washington Post) will kick off the tour with a special one-night performance ...