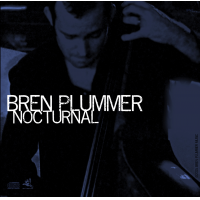 Label: Bren Plummer Music
Released: 2016
Track listing: Turn Out the Stars, In the Blue of Evening, Take Off, The Star-Crossed Lovers, Boy, What a Night!, Stars Fell on Alabama, Nocturnal, The Night We Called It a Day

Label:
Released: 2011
Track listing: Voices in my Head; Ear to the Rail; Nocturnal; You Know What I'm Saying; Green Divided by Blue; All of Us; Bela; Recluse; Here to There; Odd Hours.

New York-based virtuoso Chris Taylor spent 30 years behind the scenes as a session guitarist amid works for TV and various electronics-centered persuasions. Here, the artist steps out of the pocket for his freshman solo stint, supported by a distinguished roster of jazz-fusion artists performing on select tracks. Taylor's influences seem varied, and his ...

Necessity, they say, is the mother of invention, and for guitarist Chris Taylor--whose financial dire straits forced him to abandon Berklee and return to gigging after three semesters-- this has proven to be an undeniable truth. That was thirty years ago, and Taylor's never looked back, gigging in every imaginable situation, and exploiting his natural bent ...

Four80East a “group name" for the duo of Rob DeBoer and Tony Grace, who composed, mixed, and produced the CD and played the majority of the instruments; an occasional trumpet, tenor sax, or flute makes a cameo appearance. So predictably, it's a highly programmed affair, but as such it's a very likable effort. There's a lot ...

Rather addictive, this. Nocturnal hits so many pleasure points that the listener feels as if mind and body have been opened up. If that sounds psychedelic, so be it: The range of ideas brought to the creative table here starts with Funk and Smooth Jazz, and extends to the trippier complexities of Dub, Minimalist Trance, and ...