Mykle Lyons grew up in Ocean Springs, Mississippi, (just outside of New Orleans, Louisiana). During his youth he and his father would venture to New Orleans to hear the vast live music in and around the city. After hearing bassist "Pops" Foster at an early age, Mykle was enchanted with playing the acoustic bass. The great Ray Brown proved to be the knock-out punch for him choosing the bass as his primary instrument. In college, Mykle was fortunate enough to study Jazz with the great Ellis Marsalis for three years. Since then, Mr. Lyons has performed with such notables as: •Wynton, Ellis, Branford, Delfeyo, and Jason Marsalis •Don Braden •Lou Tabakken •Ralph Bowen •Vincent Herring •Wes Anderson •Eric Alexander •Victor Goines Mr Lyons recorded with Wynton Marsalis for the Peabody Award Winning National Public Radio Series, "The Making of the Music" 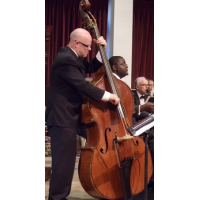