Moon Hooch captured the imaginations of thousands with its infamous stints busking on subway platforms and elsewhere in New York City: two sax players and a drummer whipping up furious, impromptu raves. This happened with such regularity at the Bedford Ave station in Williamsburg, Brooklyn, that the band was banned from playing there by the NYPD. The trio’s subsequent tours with They Might Be Giants, Lotus, and Galactic as well as on their own have only broadened the band’s appeal. Wherever Moon Hooch plays, a dance party soon follows. Hornblow Recordings and Palmetto Records are now proud to release Moon Hooch’s second album, This Is Cave Music, on Sept 16, 2014

It's been another hot sweaty week... and so we decided to open today's edition with some hot sweaty genre-defying music courtesy of Moon Hooch, Too Many Zooz and Meute, then we keep the simmer pretty steady, deep and beautiful.Happy listening!PlaylistBen Allison “Mondo Jazz Theme (feat. Ted Nash & Pyeng Threadgill)" 0:00 Moon ...

This week we go through another delicious stash of new and upcoming releases, many of them launched on Bandcamp on 1 May for the 'waived fee' events the website is promoting every first Friday of the month to support musicians in the time of Covid19. The cherry on top? The much anticipated first single, sung by ...

This week, let's sample some videos from Moon Hooch, who are returning to St. Louis to perform on Friday, October 13 at the Old Rock House. The NYC-based trio- drummer James Muschler and saxophonists Mike Wilbur and Wenzl McGowen- met while attending The New School for Jazz and Contemporary Music in NYC, and got their start ...

Moon Hooch Shakespeare's Pub Kalamazoo, Michigan May 29, 2015 It was an interesting combination. Two saxophones and a drummer, along with a sound system that kept everyone on their feet, if not dancing. The up-and-coming New York aspirants Moon Hooch (previously touring with They Might Be Giants, Lotus and Galactic), on ... 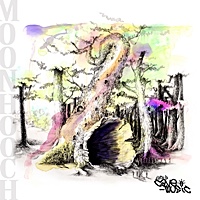 MOON HOOCH ANNOUNCES SPRING TOUR OF THE NORTHEAST; HITTING THE ROAD IN APRIL, PLAYING CLUBS AND STREET CORNERS Spawned from New York City's subway, Brooklyn “Cave Music" trio Moon Hooch is emerging to spread its infectious dance rhythms beyond the five boroughs. In addition to playing clubs, the saxophones and drums trio will do what they ...