Monome is a contemporary-Jazz Trio based between Pisa (Italy) and Berlin (Germany), which has been around since 2006, despite the fact that the three members have never lived at the same time in the same city. Since then monome has been developing a refined interplay and an extensive repertoire which is entirely made of original compositions influenced by old masters like Thelonious Monk and Wayne Shorter and by contemporary Jazz musicians like Kenny Werner and Mark Turner. Also the whole modern rock/indie scene has become a big influence on the composition and arranging process. Matteo Anelli, bass player, has been playing with a number of jazz-related projects (Grandmother – Mingus Project) as well as traditional music from Tuscany with Gatti Mezzi and Acoustic Blues with Betta Blues Society. Piergiorgio Pirro, piano player, was awarded in 2008 with the scholarship of “Siena Jazz”, and he had a chance to study with Kenny Werner, Phil Markowitz and Omer Avital 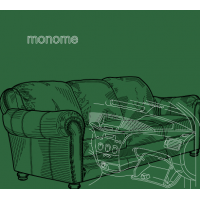 Monome began life in 2006, but on this Italian trio's debut recording it's effectively a quartet, with German saxophonist Peter Ehwald playing on five of the seven tracks. Ehwald first played with Monome in 2010, and since when their collaborations have become increasingly frequent, to the point that his presence here is an essential ingredient in ...

The Italian innovative jazz group Monome (not the be confused with Spanish rock band The Monomes) makes a reserved yet vigorous statement with its eponymous debut. The session comprises of seven, modal and atmospheric tracks that have strong, western classical influences. The collaborative trio opens the disc with “Scales"; an almost theatrical piece ...

Monome, a piano-led trio from Pisa, shares its name with the Monome, a computer interface device popular with makers of electronic music. Whether this is deliberate or coincidental is unclear, but Monome the band makes acoustic music without the need for its electronic namesake. Its eponymous debut album, recorded in late 2011 and early 2012, features ...