Born and raised in New York City, Miriam Sullivan was exposed to music by her parents. Their great taste and variety in music largely influenced her early on in life. At the age of twelve she had her first formal instruction in music, studying classical guitar with Jim Bartow at the Harlem School of the Arts. She became a regular face in just about all of the studios there, including dance, drama, visual art, percussion, piano and chorus. Shortly after, Miriam was accepted into the Fiorello Laguardia School of Music and Performing Arts, where she switched from guitar to play cello in the orchestra, ultimately switching to the bass

For saxophonist Tia Fuller, becoming a musician, and concentrating on jazz, seems almost preordained. After all, she came from a musical family who loved and performed jazz. She started playing piano at the age of 3. Music has always been in her life. Then there's that family video where, at age 9, asked what ... 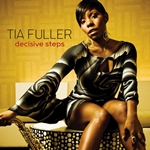