Mircea Tiberian is a jazz musician and professor of music at the National University of Music in Bucharest. He coordinates the Jazz Department, which he set up in 1991. Tiberian spent his childhood and adolescence in Sibiu, Transylvania where he made his debut at the International Jazz Festival in 1974. He holds a doctorate in music. He currently lives in Bucharest. He has performed the world over with such musicians as Larry Coryell, Tomasz Stanko, Herb Robertson, John Betsch, Ed Shuller, Nicholas Simion, Adam Pieronczyk, Maurice de Martin, Theo Jörgensmann and the Romanians Johnny Raducanu, Aura Urziceanu, Anca Parghel and Dan Mandrila.

The size of a group means nothing. There's as much fantastic music created by a trio as there is by a big band. This episode of OMJ attempts to prove that with sparkling new music from trios (Jason Robinson, Bruno Räberg & Bob Weiner -a definite must on my faves of 2020 list, Cuban/Polish saxophonist Luis ...

When a highly respected saxophonist like David Binney recommends a young up-and-coming musician, I tend to pay attention. Los Angeles trombonist Logan Kane and his Nonet live up to the tip on his new Nope, Science, one of the featured new releases hitting this week. Also of great interest are albums from the much-admired trumpeter Ambrose ...

Both sides of the river 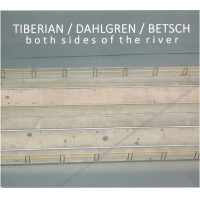 Pianist Mircea Tiberian is an emblematic figure of Romanian jazz, with a prodigious musical and academic career. He plays an influential role in the jazz scene and as author of many theoretical studies and essays, fosters its development on the theoretical level as well. Along his 40 year career Tiberian has played with top ranking Romanian ...

Garana Jazz Festival Wolf's Meadow Garana, Romania July 10-13, 2014 One of Europe's most visited festivals, taking place on a meadow over 300 ft. high in the Western Carpathians, just had its 18th anniversary. The lineup, a brand mark of the festival director, Marius Giura, combined again tradition ...

Dinner For One (14 Piano Improvisations)

Jazz in ChurchBucharest, Romania March 21-24, 2013 From the very first edition, Jazz in Church has convinced through professionalism and a musical excellence, which are sure to place it soon among the best-rated European festivals. By putting together an illustrious lineup and demonstrating exquisite selectivity, the organizers inaugurated a location that emulates ...