William McKinney, showman-drummer, formed his Cotton Pickers in Springfield, Ohio in 1922, but it was not until the summer of 1928 that they commenced their short but illustrious recording career for Victor. In the autumn of 1931 Don Redman, who did most of the arrangements, took a band of his own, including in it several of the Cotton Pickers. The Cotton Pickers were based originally in the Greystone Ballroom in Detroit, opposite Jean Goldkette's excellent White orchestra, but by the early part of 1929 we find them in Harlem at various nightspots. Their personnel varied as any personnel in a band this size, but in it's ranks were at one time such brilliant stars of the Harlem Jazz firmament as Benny Carter, Coleman Hawkins, Lonnie Johnson, James P

The clarinet dominated the reeds throughout the 1920s. Sidney Bechet made a stand with the soprano sax and Frankie Trumbauer celebrated the lightness of the C-melody sax. And then there was Coleman Hawkins. Our guest in this hour is Jeff Decker—saxophonist, composer, educator and member of the jazz performance faculty of the University of ...

In the last hour, we explored the jazz of King Oliver's Chicago in the 1920s, and heard from The New Orleans Rhythm Kings, clarinetists Jimmy Noone and Johnny Dodds, pianists Earl Hines and Lovie Austin, cornetist Freddie Keppard and trumpeter Jabbo Smith. Now we move to the other emerging center of the music, New ... 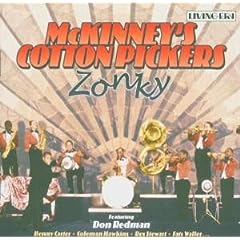