Jazz guitarist /composer Mark Kleinhaut has been playing guitar since he was nine-years-old; when he converted his sister’s folk guitar into an electric guitar by screwing a radio shack clip microphone to its top and plugging it into the home stereo. By age 12 he was playing one chord jams with his friends. Mark’s interest in jazz developed gradually; as a kid hacking around on the guitar, he was really into Yes, Genesis, ELP and Jethro Tull, and when he heard groups like the Mahavishnu Orchestra, Return to Forever and Weather Report, it changed everything. For Mark, the virtuosity, extended compositions and interaction of these musicians was overwhelming–pure magic 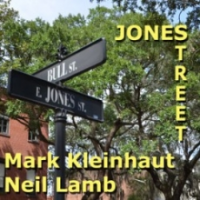 Six strings or seven...twelve frets give or take a couple. That is what the guitar is. Mark Kleinhaut and Hristo Vitchev are two guitarists whose vision expands the role of the guitar in both composition and improvisation. They explore, Kleinhaut with immediate improvisation and Vitchev with directed performance, the length and breadth of guitar playing with ...

A Balance of Light

Mark Kleinhaut is back with longtime bandmates Jim Lyden (bass) and Les Harris, Jr. (drums), extending the parameters with excursions into electronica, rock and Latin music. The results on Holding the Center are emphatically convincing. Kleinhaut has a full-bodied, well-rounded tone. His guitar is an eloquent messenger, filled with melody, bounce, swing and looping patterns that ...

It was time for this to happen. Guitarist Mark Kleinhaut has put out five CDs of original material, but his last two efforts, both on Invisible Music--A Balance of Light (2003) and Chasing Tales (2001)--showcased guest artists in front of the trio: alto saxophonist Bobby Watson and trumpeter Tiger Okoshi, respectively. Both were fine outings, but ...