Quickly becoming one of the most buzzed about jazz singers on the New York scene, Marianne Solivan does not remember an “ah-ha” moment that brought her to the music she has devoted herself to: “I don’t recall having a big moment that made me like jazz. I just dug it.” It is that same simplicity of statement with its intrinsic honesty that characterizes Solivan’s style. The infallible swing of Ella, the daring of Betty Carter, the matter-of factness of Carmen McRae…They can all be found in the voice of Marianne Solivan, whom trumpeter Jeremy Pelt has called “the modern-day paradigm to which all singers should aspire.” It is no coincidence that the 2009 Jazzmobile Vocal Competition finalist has graced recital halls, jam sessions and club stages with such noted musicians as Roy Hargrove, Steve Lacy, Jeremy Pelt, Ray Gallon (Ron Carter, Art Farmer, Lionel Hampton, T.S 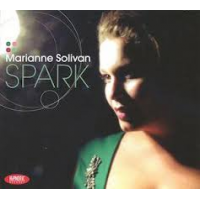 Label: HiPNOTIC Records
Released: 2015
Track listing: Spark; Humdrum Blues; First Desire; The Lies of Handsome Men; Tender As a Rose; I Wanna Be Around; If I Were to Love You; The Dove; This Is New; On a Clear Night; Ooh, What'cha Doin' To Me; El Cantante; What Are You Doing New Year's Eve?

Spike Wilner is a pianist who operates two jazz clubs in jny: New York City with his partners Chris Borden and Lee Kostrinsky. Smalls and Mezzrow are within a short walk of one another in Greenwich Village. They present familiar artists like Lew Tabackin, Frank Lacy, Pete Malinverni, Johnny O'Neal and Wilner himself, as well as ...