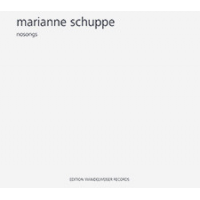 German-born, but based in the Swiss city of Basle, Marianne Schuppe is a musician with a relatively small discography but an impressively broad musical history. She has been associated with the Wandelweiser collective for some years, and Nosongs is her second release on the label, following in the footsteps of Slow Songs (Edition Wandelweiser, ...