Originally from Italy and a graduate of the Conservatory Of Music ‘Lorenzo Perosi” in Campobasso, drummer Luca Santaniello has been living in New York City since 2001, performing as a freelance jazz musician and collaborating with musicians from the international jazz scene. He has performed in the finest New York City Jazz Clubs and venues as well as toured most of Europe with several different bands that vary in a wide range of jazz styles. Since relocating to New York, he has been collaborating with musicians such as Roy Hargrove, Lee Konitz, Joe Locke,Ted Rosenthal, JD Allen, Harry Allen, Joe Cohn , Grant Stewart, Lonnie Plaxico, Marcus Strickland, Joel Frahm, Norman Simmons, Jimmy Bruno , Rhan Burton, Curtis Lundy, Paul Bollenbach, Darryl Hall, Francois Moutin, Donny Mc Caslin, Jay Leonhart, Avishai Cohen, , Ugonna Okegwo, Jaleel Shaw, Charles Neville (Neville Brothers), Joe Martin, Mayron Walden, and many others He began his professional jazz career at the age of 14 performing and touring all over the European territory with ensembles from the “Thelonious Monk Association of Jazz Music” (Campobasso,Italy)) such as The Rhythm Machine, Orchestra Laboratorio Thelonious Monk, and other bands and orchestras such as Ketoniche Percussions ,Delight Crew, Blue Iamge, Zasa Quartet 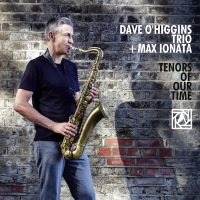 Tenors Of Our Time was recorded on 14 May 2018 “live" with all the musicians in the same room and no headphones. Leader, tenorist Dave O'Higgins may have originally taken as a template for this album the team-up of Sonny Stitt and Sonny Rollins on the 1959 album Sonny Side Up (Verve) from where Stitt's boppy ...

Jersey City native Carlos Abadie has been a mainstay on the New York City jazz circuit for almost two decades. The trumpeter and composer has been a member of pianist Jason Lindner's big band and has worked with bassist Omer Avital and saxophonists Illinois Jacquet and Mark Turner. His debut as a leader, Immersed In The ...

The Carlos Abadie Quintet: Immersed in the Quest, Vol. 1

It would be a misnomer to call the Carlos Abadie Quintet a new band; after all, the group has been around for a decade. But it is one of those anomalies of fate that it is not better known. It should, and the reasons are manifested on Immersed in the Quest, Vol. 1, which carries a ...

Meet Luca Santaniello: Originally from Italy and a graduate of the Conservatory Of Music 'Lorenzo Perosi' in Campobasso, drummer Luca Santaniello has been living in New York City since 2001, performing as a freelance jazz musician and collaborating with musicians from the international jazz scene. He has performed in the finest New York City jazz clubs ...