Louis Landon has played classical music for Mikhail Baryshnikov and Latin music with "Pucho and his Latin Soul Brothers" on national and international tours, pop music with Rupert "Pina Colada Song" Holmes on television and national tours, rock with John Hall, opening for "Little Feat" on national tours and has written and produced music for film, video, and commercials, including three years of "best plays" and "bloopers" commercials for the National Basketball Association. He has been performing his own music in the New York tri-state area for the past 12 years. Louis Landon's latest CD, released in January of 2008, is solo piano neo classical, new age jazz CD entitled "Peace Revolution!" and is currently charted at #7 of the top 100 CDs for the month of March, 2008 on NewAgeReporter.com's website, getting airplay nationally and internationally! It is also featured on internet and satellite radio stations including "Whisperings" at www.solopianoradio.com, reaching over 1 million people monthly. Samples from "Peace Revolution!" are available at http://cdbaby.com/cd/louis5 and myspace.com/louislandon2 Landon's personal mission in life is to create a more emotional world by creating and performing music from his heart. 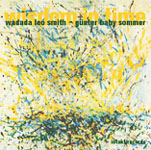 More than 25 years have passed since the late, great bassist Peter Kowald introduced trumpeter Wadada Leo Smith to then East German drummer Günter Baby Sommer. The Chicago-Wuppertal-Dresden axis of three idiosyncratic and free-minded improvisers toured Europe and recorded one of the longstanding and seminal documents of European-American free improvisation, Touch The Earth--Break The Shells (Intakt, ...