Lola Regenthal, born and raised in Räpplinge on the island Öland SE, developed her passion for music at an early age. At age 10 Lola began her musical journey behind the drumset. This led her into the world of jazz, and together with her passion for singing, Soul, Funk and Jazz made Lola develop a childish joy towards what the voice can accomplish. Lola studied music high school in Oskarshamn SE, then received her bachelor in jazzvocals at Academy of Music and Drama in Gothenburg followed by an erasmus semester at ZHdK (Züricher Hochschule der Künste) as well as a masters in vocal pedagogy at Gothenburg University. For several years, Lola held concerts at the swedish royal family's summer residence Solliden, Öland SE such as Crown Princess Victorias birthdays, concerts held on Solliden stage and during other big events at the palace. After the studies at ZHdK Lola stayed 2 years in Switzerland 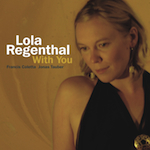