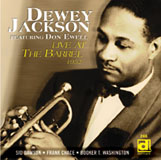 Dewey Jackson: Live at the Barrel 1952

An exact contemporary of Louis Armstrong, St. Louis trumpet player Dewey Jackson (1900-1966) claimed that his favorite players of the instrument were Louis Desvigne, Johnny Dunn and Tommy Ladnier. Approximately one percent of you are nodding your heads sagely at this point, saying, “Ah, another trumpeter from the Desvigne-Dunn-Ladnier school of jazz; marvelous," while the rest ...