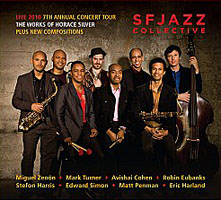 Despite a format that's become, by definition, formulaic, the SFJAZZ Collective has managed to defy weary predictability, releasing a new collection, each and every year, which pays a most modern tribute to another of jazz's most iconic figures. Every year since 2004, the Collective's members each select music from the chosen artist's discography, creating arrangements with ...