These Leos Are Jazz Lions

Many special birthdays in this episode of A Broad Spectrum as we honor the great Abbey Lincoln and remember Bernice Petkere, named the “Queen of Tin Pan Alley" by Irving Berlin for her songs “Close Your Eyes" and “"Lullaby of the Leaves." Playlist Linda Dachtyl “A Late One" from A Late One (Chicken ... 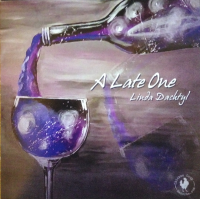 Linda Dachtyl: A Late One

Organist/drummer Linda Dachtyl, by virtue of her percussion-keys intersection, makes a fitting and insightful interpreter of the jazz organ repertoire. She displayed considerable command of this on her recording, For Hep Cats (Summit, 2008). On the present A Late One, Dachtyl steps out of the organ grinder box to expand her pedal palette in to areas ...

Linda Dauwalder-Dachtyl was introduced to organ jazz community by Tony Monaco with her LDB3 and Friends (Chicken Coop, 2006), a durable and well-received debut. Dachtyl is back with a blues-infused collection that samples Ray Charles, Howlin' Wolf, and Thelonious Monk. Dachtyl's core trio includes guitarist Robert Kraut (also associated with Monaco) and husband/drummer Cary Dachtyl. When ...