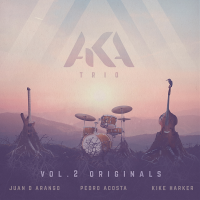 With 6 recordings as a leader Juan D Arango is in a constant exploration of concepts where improvisation plays a very important role in the development of compositions. Currently, Juan is playing with AKA TRIO, MÈDULLA and AHUM. On february 2018 he forms a duo called Mèdulla with drummer Pedro Acosta, the duo explores the pc as part of the music and the timbre, they improvise over original compositions, standards and popular songs. Also, alongside Pedro Acosta and Kike Harker, on 2018 they decided to start a new project, trio style AKA TRIO. The trio have a strong influence of 1950´s BlueNote Artists such as Jackie McLean, Lee Morgan, Louis Smith, Hank Mobley, Kenny Drew, Curtis Fuller, Sonny Stitt among others and a great influence by Colombia roots music