Nova is the soundtrack to a movie starring Fred Astaire and Lena Horne, directed by Federico Fellini. (Which is a strong contender for the best movie never made.) It’s the kind of record, at least, you make as one of St. Louis’ most respected drummers, featured in Modern Drummer, fresh from releasing a well-received album with soul-punk band The Feed and then lately inspired by a deep & deepening trip through Spain. In other words, it’s intoxicating, it’s invigorating, it’s joyous. Like Kevin Bowers himself, it knows why secrets are whispered. And how to throw a party. Kevin’s sketch of Spain is the story of two lovers meeting near the Mediterranean Sea 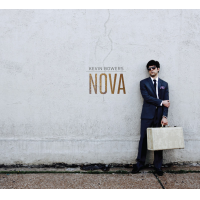 Acclaimed Drummer Kevin Bowers’ Third Solo Album, Nova, Poised To Be The Soundtrack To The Best Movie Never Made Kevin Bowers Set To Release Third Solo Album Nova This August Imagine a movie starring Fred Astaire and Lena Horne, and directed by Federico Fellini. In your mind’s ear, listen to the soundtrack, a mélange of Brazilian ...