Kesha Janaan is a jazz, blues, & R&B singer from the United States. Born and raised in Los Angeles, California, Kesha is the daughter of Grammy award-winning jazz guitarist, Norman Brown. She has been a background singer for icons such as Deniece Williams & Bobby Caldwell and has toured as a background vocalist with her father and saxophonist Marion Meadows. She is a member of Sisters of Unbreakable Love (S.O.U.L.), a band she created with her sisters and was featured on their debut single Hold on. The band was featured on two tracks on Norman Brown's 2017 album Let It Go. Those tracks were Conversations and Living Out Your Destiny 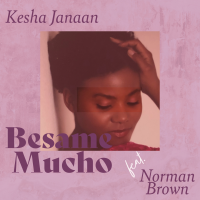