Danish pianist and composer Karen Bach established the trio in 2004 while studying at the Rhythmic Music Conservatory in Copenhagen, and since then they have been playing various scenes and festivals in Denmark, Sweden and Germany, and recorded three albums together. The first album Samtale (english: Conversation) was recorded during four cold September nights at Christians Church in Copenhagen, fall 2005. Second album Flash Forward and Back was released at Copenhagen Jazzhouse, fall 2007, and mastered by the famous norwegian ECM-veteran Jan Erik Kongshaug. These albums can be found at iTunes, Amazon, Napster etc. Now, the trio is ready with their third and newest album recording Secret Rooms, which has just been released in the summer of 2010. This music is a journey through various of styles, and can best be described as a nordic, melodic, bold and experimenting dialogue, set between piano, bass and drums. 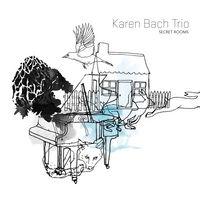 The Danish jazz scene has evolved tremendously during recent years. The recurring Copenhagen Jazz Festival is a testament to the strength of the Danish jazz scene and its ability to soak up influences from outside. Openness towards musical influences is also reflected in this year's harvest of the best Danish records, which often bring in American ...

One of the joys of following a trio throughout many years of musical communication is the pleasure of hearing a distinctive sound emerge from intense work with form and content. Pianist Karen Bach's third album with her trio, Secret Rooms, is a work of distinction from three talented musicians who have worked hard to achieve their ...