Since 2003, “avant-jazz etc” guitarist Jon Lundbom has lead Jon Lundbom & Big Five Chord, with which he has released seven full-length albums and a brand-new series of four EPs. The new 2016:EPs series is available for download from Hot Cup Records or as a handsome, limited-edition four-CD boxed set right here at www.jonlundbom.com. Jon also performs with Bryan & the Hagggards, NYC’s most award-winning avant-country Merle Haggard cover band, with whom he has released three albums. The most recent, Merles Just Want to Have Fun featuring Eugene Chadbourne, was released on Northern Spy Records in 2013. Jon Lundbom & Big Five Chord features long-time friend and fellow Chicagoan Jon Irabagon on alto and soprano saxophones, Bryan Murray (aka Balto Exclamationpoint) on tenor and balto! saxophones, Moppa Elliott on bass, and “Philly” Dan Monagahan on drums. Jon’s music – described as “Hardbop + Zeppelin + Schoenberg” (Dave Madden, ‘SLUG’) – is a showcase for his “intense phrasing and mind-altering solo spots” (Glenn Astarita, ‘All About Jazz’), a “boundary-shattering shot of adrenaline that screws with your head and messes with your soul” (Jordan Richardson, ‘The Seattle PI’)

A complex web of sampling, beat construction and live improvisation all led to this disc by guitarist Jon Lundbom and his group, Big Five Chord, a CD that is a heady stew of hard-edged funk grooves, squalling saxophones and gleeful guitar freakouts. This project started with saxophonist Bryan Murray sampling old Big Five Chord ...

Finding your own path is one thing, staying on it is another. This show features several musicians who are doing that today. Bassist Moppa Elliott's urge to challenge the idiom is not confined to his occasionally controversial Mostly Other People Do The Killing. His new recording, Jazz Band/Rock Band/Dance Band, presents three distinctly different bands and ...

Last week we dived deep in some of the best new releases of 2019. Two hours were not enough so this week we continue our quest for fascinating new jazz out there... and we'll branch out a bit going into releases that came out at the end of 2018 as well. Many of the albums we're ...

Sometimes a single track can satisfy an album's worth of listening. You get that feeling with “People be Talking," the first song on Jon Lundbom's ninth release with his band Big Five Chord. His quintet packs everything into this kitchen sink composition. The piece is jazz-and-not-jazz, like Miles Davis affected in his transitional years between his ... 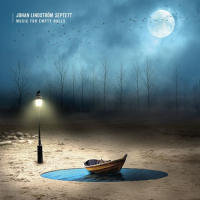 There is an old soul lurking in the body of guitarist Johan Lindström. I mean both the body corporal and his guitar body. His septet recording Music For Empty Halls draws the ear back to a time when music was less rushed and much more thoughtful. He's assembled a collection of compositions in a most considerate ...