Jimmy Bennington (born May 22, 1970; Columbus, Ohio) is a self-taught artist who began playing professionally in Texas, 1990. Mentored by late John Coltrane drummer Elvin Jones during the last decade of his life, Bennington was eventually hired as Jones' band manager/drum tech, touring the world as part of the Elvin Jones Jazz Machine (2000-2002). Since then, Bennington lived on the West Coast for several years (1997-2006), and has made Chicago his home base (2006-Present). Jimmy has performed and recorded with artists such as Julian Priester, Perry Robinson, John Stowell, Ed Schuller, Bert Wilson, Ken Filiano, Steve Cohn, John Blum, John Gross, Daniel Carter, and French bassist Benjamin Duboc

Welcome to Guitarists Rendezvous, our first installment in a series that introduces readers to emerging or established guitarists who fly just under the radar of public recognition. Each will field the same four questions and we've included audio and video so you can sample their music. We kick of the column with a diverse ... 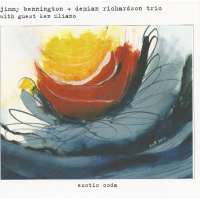 "Jimmy Bennington and Perry Robinson show no generation gap. Bennington plays like a veteran and Robinson delivers with a young lion's innocence. This is a pairing that over the past few years seems to have brought out the best in both. Here they stretch out in relaxed but dynamic fashion over three tracks and produce what ...

A decade's worth of demos. Such was the gauntlet drummer Jimmy Bennington describes that led to his CIMP debut. Where others might cling to lingering frustration or ire in the wake of such a rigorous set of paces, Bennington's sketch of the anecdote is almost matter-of-fact. Part of that might be because his patient persistence paid ...

Burton Greene and Perry Robinson: Two Voices in the Desert; Groder&Greene The Spirits at Belle's

Another Friend: The Music of Herbie Nichols 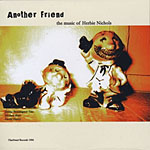 The music of pianist and composer Herbie Nichols (1919-1963) has experienced something a renaissance in recent years. This is, in no small part, due to the tireless work of trombonist Roswell Rudd, who has recorded his compositions and published the book Herbie Nichols: The Unpublished Works (2000), containing 27 of Nichols' compositions. Thus, thanks to the ...