In the 1950s when everyone else his age was listening to Elvis Presley and Connie Francis, Jim Cullum locked onto the sounds of early jazz greats Louis Armstrong, Bix Beiderbecke, King Oliver and Jelly Roll Morton. At first he thought he might want to play trombone, but one day while helping his dad in the grocery business, Jim caught sight of an antique cornet in a store window and fell in love.

While attending Trinity University in San Antonio, Jim formed a seven-piece traditional jazz group, the Happy Jazz Band, with his father the late Jim Cullum, Sr., who had played professionally with Jack Teagarden and others in the 1940s 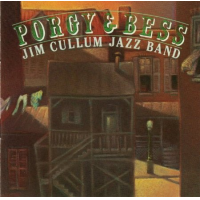 Since its New York City debut in September 1935, George Gershwin's beloved folk opera Porgy and Bess has been recreated and performed in almost every possible context, from classical opera to musical theatre to mainstream jazz, in America and overseas. The opera has been probed and dissected so often, in fact, that at first blush another ...

A Triple Crown Of Tunesmiths This Week On Riverwalk Jazz

This week on Riverwalk Jazz, it’s the music of songwriters Vincent Youmans, Johnny Green and Harry Barris. Special guests Shelly Berg and Dick Hyman join The Jim Cullum Jazz Band on piano and Topsy Chapman, Marty Grosz and Carol Woods handle the vocals. The program is distributed in the US by Public Radio International, on Sirius/XM ...

This week on Riverwalk Jazz, The Jim Cullum Jazz Band with guests Dick Hyman, Topsy Chapman, Harry Allen and others, explore the towering legacy of John Hammond, the man called “the most influential talent scout and music producer in history.” The program is distributed in the US by Public Radio International, on Sirius/XM satellite radio and ...

This Week On Riverwalk Jazz: Wizard Of Oz With Vernel Bagneris

This week on Riverwalk Jazz, The Wonderful Wizard of Oz comes to life as Broadway actor Vernel Bagneris portrays all the characters of Oz in a new script for radio based on the original L. Frank Baum book. The brilliance of Harold Arlen’s art as a songwriter is displayed in new jazz arrangements and performances by ...

Songwriting Bandleaders Of The Swing Era This Week On Riverwalk Jazz

This week on Riverwalk Jazz, vocalist and Arbors recording artist Rebecca Kilgore joins The Jim Cullum Jazz Band to celebrate Songwriting Bandleaders of the Swing Era with music by Ray Noble, Isham Jones, Artie Shaw and Duke Ellington. The program is distributed in the US by Public Radio International, on Sirius/XM satellite radio and can be ...

This Week On Riverwalk Jazz: The Great Innovator---benny Goodman

Benny Goodman, the clarinet virtuoso from Chicago, became a central figure of the Swing Era and popularized the jazz form with a worldwide audience in the 1930s and beyond. To celebrate Goodman’s innovative style, Riverwalk Jazz has assembled performances and stories from our stable of jazz greats drawn into his orbit—Lionel Hampton, Doc Cheatham, Helen Ward—and ...

This Week On Riverwalk Jazz: Battle Of The Bands With Banu Gibson, Savion Glover & William Warfield

Riverwalk Jazz this week presents an old-fashioned Battle of the Bands pitting the Jim Cullum Jazz Band against Banu Gibson and her New Orleans Hot Jazz. The program is distributed in the US by Public Radio International, on Sirius/XM satellite radio and can be streamed on-demand from the Riverwalk Jazz website. You can also drop in ...