Jean Vanasse started his musical study at CEGEP of Drummondville in 1971 then he entered the Quebec music Conservatory in 72 and swichted to Montreal Conservatory in 73 where he studied till 75 with Maestro Louis Charbonneau and Guy Lachapelle respectively tympanist and first percussionist at MSO (Montreal Symphonic Orcherstra).

Barely comming out of the Conservatory, he founded a jazz quartet named L'Orchestre Sympathique with flute player François Richard. This group will have a lot of success in Quebec Canada and Europe. Meanwhile he's playing with the quartet, he is also backing french québécoise singer Pauline Julien from 77 to 81, recording and giving concerts in Canada, Quebec and Europe.

From 81 to 86 he is playing exclusivly in Europe with his band ¨L'OS¨, England, France, Switzerland, Germany, Belgium, Danemark, Holland, Luxembourg, Italy and Yougoslavia, playing in many festivals, House of Culture , Jazz Clubs like The New Morning in Paris and Geneva, The Brussels Jazz club, Le Petit Opportun, The Sunset in Paris, The Jazz Husset in Aarhus Danemark, Bim House in Amsterdam

Days 1-3 | Days 4-6 Festival International de Jazz de Montréal Montréal, Canada June 25-July 4, 2011 Montréal is a city in transition, and in a move that's absolutely uncharacteristic of other Canadian cities, is planning a downtown renovation driven, in no small part, by the arts. Place des ...

For most people it is impossible to be equally disposed toward all musical instruments and their generic sound; some immediately resonate, others never, even over an entire lifetime. A musician who manages to win over those previously indifferent or worse--through the power of sound, invention or understanding of the possibilities of the instrument--is to be ranked ... 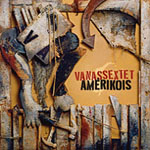