Born in 1994 in Innsbruck, Austria, Max Plattner quickly found his path to music through his older brother Florian Plattner, who later also found his way to the music industry as an guitarist. After building his own drums out of pillows, pots and cookie jars, his parents got him his first set of drums at the age of 5. At this time he started exploring the music of Alphonse Mouzon, Screaming Headless Torsos, and Michel Camilo. From 2002 on he studied with Austrian studio drummer Peter Penz as well as the cologne classical drummer Martin Köhler. From 2005 on you could hear Max Plattner playing session openers and smaller festivals throughout Tyrol 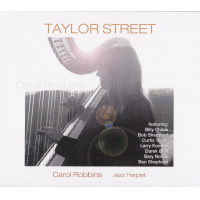 In the context of jazz, the harp is a rare instrument indeed and there are proportionately few players in the field. Two exponents of this rare art are Alice Coltrane and the British harpist David Snell whose library composition “International Flight" is a jazz harp classic. A third is Carol Robbins, whose album Taylor Street is ...

The harp is certainly rare in jazz and so its role in a traditional combo is not well defined. Alice Coltrane, for example used it as a supplement to her keyboards, while Adele Girard, played it like a boogie woogie piano. Others like Janet Putnam and Betty Glamann were relegated to a rhythm guitar role in ...

While the harp is often pigeonholed as an instrument that belongs in the confines of classical music, artists like Carol Robbins, Zeena Parkins and Edmar Castaneda are helping to change public perception about this topic. Castaneda has created rhythmically engaging music that's high on excitement, and Parkins is constantly breaking barriers by invading every area, from ...

The harp is probably one of the least recognized and utilized instruments in jazz yet, the jazz harp is as much a part of the genre as the saxophone, with only a handful of musicians making it their instrument of choice. The late Dorothy Ashby and Alice Coltrane, along with Lori Andrews, Columbian Edmar Castaneda and ... 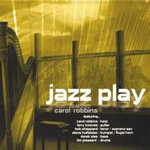 Close in timbre to a guitar but with a much wider scope and open feel, the concert harp can both thrill with sheets of sound and soothe with delicate nuance. There is all this and more on Jazz Play. Harpist Carol Robbins places her instrument in the midst of a jazz ensemble for a most agreeable ...

The harp makes one of its rare appearances in jazz in the hands of Carol Robbins on Jazz Play. She also wrote several of the tunes on this recording and included some standards. And where does that place the music? Right in the mainstream, with some softer shades of what is known as contemporary jazz. The ...