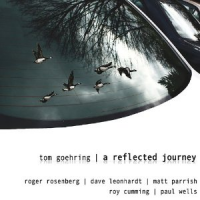 A Reflected Journey is a quintet date, but it doesn't have a quintet date feel about it. The man of the hour--trumpeter Tom Goehring--doubles on flugelhorn, and his front line partner, the ever engaging and well-rounded Roger Rosenberg, covers baritone saxophone, soprano saxophone and bass clarinet. With all of those horns in the picture, and a ...

Meet Mike Rood:Born into a musical family, Mike has always been immersed in music. He has been playing guitar since he was seven, and his early influences include Stevie Ray Vaughan and Jimi Hendrix. Mike also studied classical piano for 13 years, performing in dozens of recitals and competitions. He won the Nicolas Flagello ...

Jamie Begian Big BandBig Fat GrinInnova Records2010 If the music on Jamie Begian's Big Fat Grin were any bigger and fatter, the grin would challenge that of Lewis Carroll's Cheshire cat from Alice in Wonderland. No, not the cat that appears in Tim Burton's film, because that image ...