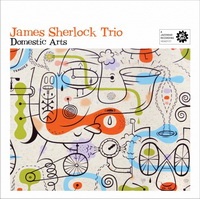 Domestic Arts caps a busy 2010 for Melbourne guitarist James Sherlock, following the release, earlier in the year, of the impressive Solo (Pinnacles Music, 2010). That recording highlighted not only Sherlock's notable chops but also his songwriting skills, with more than half the compositions self-penned works of striking originality and nuance. This time out Sherlock leads ...