“One of the best kept secrets in Canada, … a truly remarkable musician.” (- Bill King, Jazz Preview, Jazz FM91.1) Originally from Vancouver, Canada, jazz clarinetist/composer James Danderfer has been traveling, studying and performing around the world since the age of 16. His travels first began when he was accepted into the prestigious Interlochen World Center For The Arts high school (USA) to study with renowned clarinetist Richard Hawkins. James attended the University of North Texas and later received a bachelor’s degree in jazz performance from Western Michigan University where he was a featured soloist and composer in both concerts and recordings 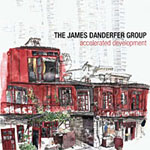 For those who thought that the development of modern clarinet repertoire ended with the last release of Eddie Daniels, think again. James Danderfer's Accelerated Development gives notice that new possibilities for the clarinet are on their way again. What's more, with the nine charts that he has written, Danderfer has, also creates a harmonic palette of ...