Humphrey Lyttelton is descended from a long line of land-owning, political, military, clerical, scholastic and literary forebears. Not a musician among them. He claims to have most in common with a former Humphrey Lyttelton who was executed for complicity with Guy Fawkes in the Gunpowder plot. He was born on May 23rd, 1921 in Eton College, where his father was a famous housemaster, and where he was subsequently educated. During the war, he served as an officer in the Grenadiar Guards and, on demobilisation, studied for two years at Camberwell Arts School. In 1949, he joined the London Daily Mail as cartoonist, during which time he also wrote the story-line for Trog's 'Flook' cartoon" Trog being the nom de plume of clarinetist Wally Fawkes. He formed his first jazz band in 1948, after spending a year with George Webb’s Dixielanders, a band which pioneered New Orleans-style jazz in Britain

Between April 1964 and August 1966, BBC2 in the U.K. aired an hour-long TV show called Jazz 625. It was broadcast on 625-lines UHF rather than the 405-lines VHF system then used by the other channels. This allowed for a better signal at home. What was particularly noteworthy about the show is that it began airing ... 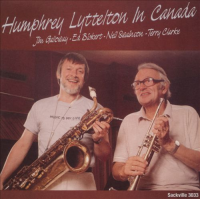 The most prolific of the British trad jazz revivalists, trumpeter Humphrey Lyttelton had a long and varied career both as a musician and a broadcaster. In 1983 Lyttelton lead a Toronto based group on a session for Sackville interpreting eight songs penned by him. In Canada now reissued on Delmark showcases not only Lyttleton's superb trumpet ...

In August 1966, Dizzy Gillespie appeared in London on the BBC's Jazz 625 TV show. Gillespie was introduced by British “trad jazz" trumpeter Humphrey Lyttelton and then appeared with James Moody (ts,as,fl), Kenny Barron (p), Chris White (b) and Rudy Collins (d) for a five-song set. While parts of this video have been up on YouTube ...

Several years ago, when the Skip Heller Trio was touring all the time, I came across a disc called London Is The Place For Me: Trinidadian Calypso In London, 1950-1956 (Honest Jons, 2002), a collection of calyspo music recorded in London. The music and accompanying thick booklet were full of revelations: the history of postwar migration ...