Biography - GIULIANO PEREIRA Like many contemporary improvising musicians, saxophonist Giuliano Pereira is the archetypal global citizen. He left his native Brazil in the late 90s, resided in New York and Madrid before finally settling in London in 2009. He has also performed in Canada, Portugal, Angola, Argentina, Uruguay, Paraguay, Bulgaria, Bahrain and Sweden. In Brazil, he trained at the Carlos de Campos de Tatui Conservatoire where his tutors included Claudio Leal [harmony] and David Richards [Improvisation]. In addition to this formal musical education, Pereira began to perform and record studio sessions, exploring and developing his own style 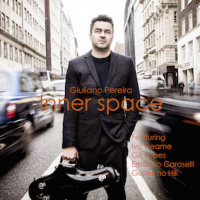