Freelance saxophonist, composer Gil Del Bosque, based in Austin, TX. Holds a regular performing schedule in Austin as well as across the state of Texas. He has shared with the likes of Boyz II Men, Huey Lewis and the News, Aaron Neville, Chris Potter, Mike Clarke, Debbie Boone and salsa singer Olga Tanon. In addition to performing, Gil currently teaches a studio of 40 saxophone and clarinet students. He has served as guest artist and clinician at various universities. Gil just released his debut album, "Here with You" on August 17, 2017. Recorded in Austin, TX accompanied by Chihuahua guitarist, composer, college professor and ex UNT alum, Armando Nunez Portillo, bassist Eric Ross, and BoDeans drummer, David Sierra

You Me Happy (feat. Adrian Ruiz) 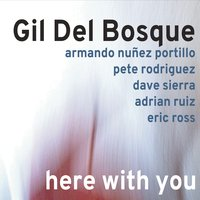