While he was a Freshman at Carnegie Mellon University in Pittsburgh, Pennsylvania, George Gee launched his Make-Believe Ballroom program (named after the vintage Martin Block show) on the college radio station - and told everyone who’d listen about his dream of leading his own big band. In an era when punk, new wave and heavy metal ruled, some first thought that George was revisiting the past. Twenty-five years later, it is delightfully clear that George was just way ahead of his time! The only Chinese-American Swing big band leader, George Gee is unique in so many ways. The snap in his fingers, the shuffle in his step and that unbridled joy he radiates and spreads like ecstatic wildfire to all his world-class musicians make immediate and permanent impressions on audiences, musicians, and dancers - even seasoned press! It must be in his blood—since he was a kid, all George ever wanted to do was lead his own big band. A native New Yorker, George always loved music 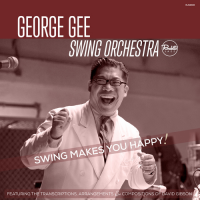 Swing Makes You Happy! isn't just an album title: it's a mantra and belief system that guides the George Gee Swing Orchestra, a little big band intent on rekindling the ear's love affair with music associated with a bygone era. Gee has been in the big band business for more than three decades, ...

Label: Rondette Jazz
Released: 2014
Track listing: Comin’ Home; Bedrock; Lindyhoppers’ Delight; Sweet Pumpkin; No Moon at All; I Knows; I’d Rather Drink Muddy Water; Baby Won’t You Please Come Home; Midnight in a Madhouse; The Road to Roscoe’s; If I Were a Bell; It Was a Very Good Year; That’s No Joke; You Say You Care; Hash Mash; Nature Boy; Evenin’; A Tribute to Someone; Blue Minor.

The George Gee Swing Orchestra swings in the manner of Gee's friend and mentor, Count Basie, albeit on a somewhat smaller scale (Gee's group numbers only eleven, and that includes vocalists Hilary Gardner and John Dokes). Even so, the Basie spirit is ever-present, and if Swing Makes You Happy, Gee's eighth album as leader (and first ...

Label: GJazz Records
Released: 2005
Track listing: Out of Nowhere; Settin' the Pace; Lover Come Back to Me; In a Sentimental Mood; Mambo Inn; Ready Now That You Are GG; Bass in Yo' Face; The Very Thought of You; When Your Lover Has Gone; Autumn Leaves; I Don't Want to Learn to Sing the Blues; Scrapple from the Apple

Although they're not typically household names, a strong case can be made that no single group has had more of an influence on the sound of American music than arrangers. One thing that can't be disputed though, is that the arranger is front and center when it comes to big band swing. A first-person participatory tribute ...