Introduced to the bassoon in the Massapequa, NY public schools, Frank Morelli studied with Stephen Maxym at the Manhattan School of Music and later became the first bassoonist to be awarded a doctorate by the Juilliard School. He has made nine appearances as soloist in New York’s Carnegie Hall playing concertos, Sinfonias concertantes, and even a solo ballad with the Carnegie Hall Jazz Band. The Miami Herald has hailed his "breathtaking virtuosity" and the Toronto Globe and Mail proclaimed his performance: "the kind of Mozart even the most tireless concertgoer is lucky to hear once a year." Morelli has four solo CDs on MSR Classics: From the Heart: 20th Century Music for Bassoon and Piano and Romance and Caprice, with pianist Gilbert Kalish, Bassoon Brasileiro with the Orpheus Chamber Orchestra and guitarist Ben Verdery and Baroque Fireworks, which features harpsichordist Kenneth Cooper and bassoonist Harry Searing 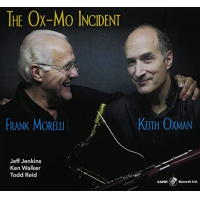 Label: Capri Records
Released: 2022
Track listing: Happy Talk; Full Moon And Empty Arms; The Surrey With The Fringe On Top; Baubles, Bangles And Beads; The Ox-Mo Incident; Three For Five; Stranger In Paradise; Poor Butterfly; A Wasp In Search Of A Hart and Lung; Pavanne; I Could Have Danced All Night 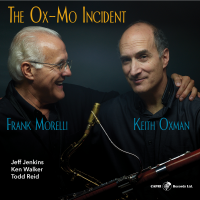 East meets Midwest on The Ox-Mo Incident, wherein Denver-based tenor saxophonist Keith Oxman shares the front line with bassoonist Frank Morelli, whose day jobs include teaching at the renowned Juilliard School in New York City and several other citadels of higher education. Although it's a long trek from Juilliard and the Orpheus Chamber Orchestra (one of ...