Marthen Eugene Mangempis, a man hailing from Manado, a guide fluent in Dutch and Ni Luh Putu Sri Nulatri Sedani, a professional dancer from Bali, on 10 April 1975 awaited the birth of their baby in a small city in Bali named Denpasar. They then named their first child Eurysondhy Andrean John Imanuel Mangempis and Erik grew up as the eldest of 5 siblings. When other children had dreams of becoming a doctor or engineer, Erik Sondhy since young, had already known for sure what he wanted in the future, which was to become a famous musician. He formed these dreams because since young, Erik really admired a band from England, which was The Beatles

The Gift of Love

The Gift of Love

Song For My Mother

Joey Alexander, the young piano phenom from Bali, has caused quite a splash in the jazz world, a player who is ridiculously talented for one so young. But there's another masterly young piano guy from the Indonesian island: Erik Sondhy. The sessions resulting in Sondhy's debut, Recorded At Abbey Road, Vol. 1, also known ... 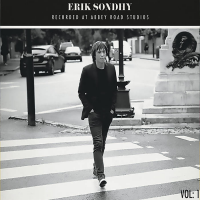 Erik Sondhy is a Balinese jazz composer and pianist with a unique voice. In July last year (2015), he realized a childhood dream by spending six hours improvising on a Steinway piano in the world famous Abbey Road studios. He left with enough material for four albums. IndoJazzia Musik, a new label, was tasked with handling ...

Fulfilling a childhood dream, and thanks to his love of all things Beatles, last July Bali-born Erik Sondhy spent six hours in London’s world famous Abbey Road studios. He improvised enough tracks for four albums, which is why this, his first solo album is sub-titled Abbey Road Sessions, Volume 1. Each track has an immediacy and a distinct personality. With "London Blues" Erik’s strong left hand bounces us straight into a striding loop of minimalist boogie-woogie over which his right hand overlays memories plucked from the ethereal funk land.
TRACK OF THE DAY July 8, 2016