Ellen Honert, a native of the Netherlands, always knew she would be a singer. She studied piano early on and then jazz voice at the Dutch Conservatory of Music but dropped out because she felt she was losing her personal voice. Cycling home from a Tuck and Patti concert in Amsterdam, she ran into the American musicians on a canal and they invited her to a jazz camp in California. Honert used this opportunity to launch her musical career in the US. After a stint of gospel singing at Glide Church in San Francisco, Honert joined V Soul, a group of singers from Glide, which toured the Netherlands. In 2006 Ellen teamed up with renowned Bay Area producer Frank Martin, who invited a host of stellar musicians, including Tuck and Patti, to record "Breath of the Soul," Ellen's first CD 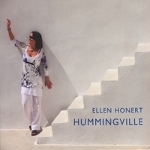 Ellen Honert's previous recording, Breath of the Soul (Mill Station, 2006), was a well-balanced affair accented by Honert's precise and sensitive singing. Hummingville, the recording and the title piece are something else altogether. There is a sea breeze in this recording and song, but it is not so much Caribbean as Mediterranean, but in either case, ... By Abraham Laboriel Listen to this performance in its entirety and be moved. Not sound bites and samples, but the work as a whole. Not bits and pieces, but an entire rainbow's arc from beginning to end. Not just skimming the surface, but diving in to sample the depths. This recording captures the collective energy of ...

Breath of the Soul

Label: Mill Station
Released: 2007
Track listing: Blue; Life Is What You Make It; Spring; Two Lonely People; Someday; Love Dance; Hope; If It's Magic; Got to Get You Into My Life; Away; Never Let Me Go; Inspiratie.

Ellen Honert: Breath of the Soul

The contemporary refrains from vocalist Ellen Honert on Breath of the Soul run smooth and sleek, and with a distinctive eloquence. She favors smooth jazz with a soulful message that comes from within. Guest artists such as Tuck & Patti, steel drummer Andy Narell, saxophonist Marc Russo, guitarist Ray Fuller and The Turtle Island String Quartet ...

Ellen Honert: Breath of the Soul

Ellen Honert possesses a perfectly balanced alto voice that easily modulates between the many highs and lows she employs in her singing--and Breath of the Soul requires much of this from her. Softly Latin in overall character and instrumentation, this music provides a humid and languid blanket for Honert's sensual craft. In addition to her vocal ...