American folk and blues musician Elizabeth Cotten, composer of the folk song classic "Freight Train" and recipient of a 1985 Grammy Award at age 93, began her career in music at an age when most people prepare for retirement. At 67 years of age Cotten, known as "Libba" by the folksinging Seeger family who discovered her talent, performed live in concert for the first time. A former maid, this versatile musician was also a songwriter and guitarist. Legendary for strumming left-handed on a guitar designed for right-handers, rather than reverse the strings she would play the guitar backwards, "picking with her left hand and chording with her right," wrote Martin F

Combining improvisational concepts with Americana aesthetics is one thing, but enveloping this blend in a songwriter approach is another story entirely. The first concept is common practice these days, the second however represents the unique character which the up and coming jny: Chicago-based guitarist Matt Gold has to offer on his compelling debut effort, Imagined Sky ... 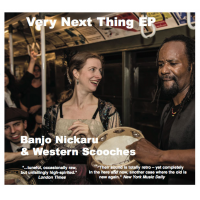